home
back to music

started late 1979 as a trio featuring larry gott on guitar and dave smith on drums.

joined by bass playing singer jeannie harris when she returned from dubai.

spent three months in dubai followed by six weeks at butlins in minehead. jeannie left during the minehead season and the band reverted back to a trio.

this period is documented in stuart maconie's book about the manchester band JAMES titled "folklore" but the following two month tour of germany, and six week tour of sicily is 'missing' from the book. strange as it was a very eventful four months that saw the band stranded in snow in germany, spending three days sleeping in the van in genoa due to a broken clutch cable, electrocuting the guitarist and having most of their money stolen!!!
Unsurprisingly, on the return to the uk the band called it a day.

larry gott went on to find fame with the band james and became a furniture designer.
2008 finds larry back on the road with james.

jeannie harris followed her love of photography and is now a lecturer at mancat. 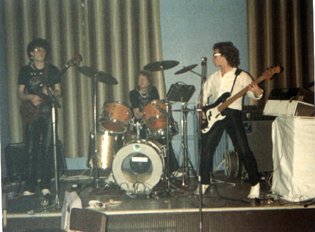 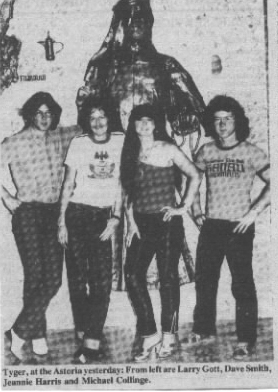