A free festival is scheduled to be held at Deeply Vale near Bury , Lancs , from July 22-24th. The festival will be a mixture of rock, street theatre, poetry and folk music.

Does it always rain in Lancashire ? It was my first visit there for many years and it was wet the whole time .The pre-arranged site turned into a bog and the three miles of pot holed dirt track was enough to put off the most hardy and acclimatized festival goers . Yet 1000-2000 of them turned up, bringing with them their fair share of welfare problems.These problems weren't the fault of the festival organisers- they were very together people. They had made very good toilets made from 40 gallon oil drums sat on the ground with a hole in the top and a seat, surrounded by a canvas shelter. They had supplied plenty of plastic rubbish sacks and water was obtainable either from a nearby stream or from the heavens . The local farmer too was very helpful and he spent much time towing cars out of the mud, bringing cinders for the track and he helped to clear up the site after the festival.

joined age 17 and the band spent 12 months rehearsing and writing 5 days a week and recorded demos for 3 albums. gigged around the manchester area gaining local radio airplay on radio piccadilly (now Key 103) and getting a feature in melody maker.

classed as a 'progressive rock' band, the arrival of punk caused difficulties with gigs and recording deals so the band went to jersey for six months.

broke up in 1979 after four years together. cause.....members getting married, having children and getting 'proper jobs'.

in 2003 keith booth re-mastered the mudanzas back catalogue onto a double cd which featured most of the studio recordings and live material.

in September 2016, mudanzas reformed with carl mallinson on drums and vocals for a performance at deeply vale 40th anniversary festival - mudanzas 2016

frank szakaley:- guitars and vocals...has own building business in rochdale does not play guitar anymore.

unissued songs live:
so far from home*
its only money*
close to you
lead vocals: john sanderson*

mudanzas
back to music 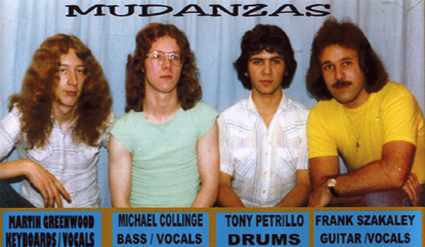 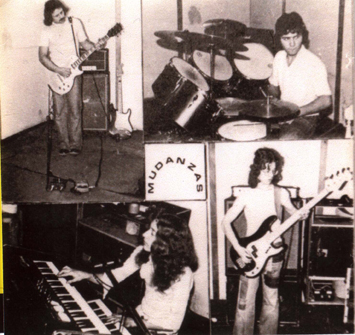 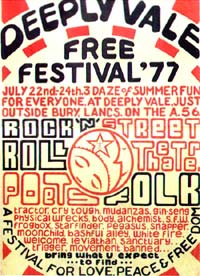 Back in 1976, a group of people who frequented the Dressers Arms, a hippy/rock pub in Heywood [across the road from where legendary Heywood/Rochdale band Tractor had their Dawson St. Heywood Recording Studio in an attic] decided to get together and hold a free rock festival at the top end of Ashworth Valley in a section of the Valley known as Deeply Vale approached on foot from Heywood or Rochdale or by car from Bury or Rossendale. This group of organisers included the band Tractor, their road crew, their manager Chris Hewitt, plus five guys who lived in a commune in Rochdale including Heywood born Dave Smith and Rochdale youth worker and artist Andy Burgoyne, Dave Edwards, Dave Hopkins and Andy Sharrocks, plus other people from Heywood and Bury including Jim O'Neill, Dave Wimbush, Cliff Jackson and Pat O'Neill to name but a few. Dave Smith of Heywood had the original idea and knew Frank Turner [who owned Deeply Vale at the time] through his father and he asked Frank Turner could he have a party camping out in Deeply Vale with a few friends - Chris Hewitt, Tractor's manager had the equipment and contacts with bands - this party turned into a three-day rock festival with 300 people that September in 1976 and then 3,000 people in 1977 and 20,000 people and over fifty bands for five days in 1978 and 1979! What started off as a crazy idea in a Heywood pub amongst a group of underground music fans, musicians and art students has become one of the greatest pop music culture events of the Northwest.

this was the first ever gig a young johnny marr attended.
home